The Administration’s ships began pursuing them a while back, pulverising a passage through the braided debris fluxes of the Pearl River. Seck Woo knew they would pick up the Good Daughter’s signal, had sensed them in the River’s swirl and grind the moment they entered its flow.

The Administration had been baying for her blood ever since her latest raid on the Sparrow Mines, carrying off precious salt and enlisting their indentured miners into her Red Fleet.

At the pilot’s seat, Liu Wei snapped to attention.

“Take us deeper in.”

“Laoda,” Liu Wei began, but she waved them quiet.

When she was younger, Seck Woo was ruthless to anyone who questioned her. These days, however, she had amassed enough power to condescend to patience. Liu Wei was new; nervous; a former labourer from the mines who had prostrated themself at her feet and begged to join her fleet. The Good Daughter was Seck Woo’s ship, and piloting it was a test for Liu Wei. After all, as Cheng Yat’s widow, Seck Woo was master of not only the Red Fleet, but of the entire Cheng clan. Or, “that granite-cold bitch”, as she was known across the Pearl System.

The Daughter navigated deeper into the River’s churning minefield. One of the Administration’s ships scraped the surface of a small asteroid and ignited into a white, bubbled flare. A volley of projectiles burst from the three other ships tailing the Daughter but Liu Wei easily avoided them.

Through the observation pane, Seck Woo watched the River: a vast, meandering current of cosmic dust and planetary shards, carving through the Pearl System toward the great Concubine Star; the life-giver and eventual devourer of its orbiting harem of scattered planets.

As always, the River whispered to her, machinating with her, unravelling its entire swathe of secrets to her. Everything the River knew, she knew.

You took my husband, she reminded it silently, Now it is my turn to reap my end of our bargain.

Seck Woo’s expression hardened. “Cut them off and eject half the payload.”

Liu Wei protested. “If we lose any cargo — you promised every crew member and their spouse a share.”

She touched a single finger to their lips. That shut them up.

“The Viceroy’s ship is behind us and I wish to send a message to the Administration.”

Liu Wei opened the cargo hold and jettisoned several crates of raw salt ingots and supplies. The Red Fleet’s disabling signature simulcast from the Daughter’s comms, sending a crackling seizure of interference to the Administration’s central hive command, severing the signal with their ships, leaving them to the mercy of their own pilots’ manual skills.

Disunited, the ships went after the salt, as Seck Woo knew they would. They spun after the ejected cargo, through a nebula of grit and straight into one of the many Mouths: the crushing, whirling debris maelstroms travelling along the River’s heart. The Viceroy’s ship veered away at the last moment, but the Daughter was waiting. Liu Wei opened fire and blew it back into the atomising grind of the maelstrom.

“Laoda,” they said, “I shouldn’t have questioned you.”

Seck Woo’s smile, though slight, hinted at smugness. “Just remember, Ah Wai. To this day, I’ve eaten more salt than you’ve ever had your fill of rice.”

“Too much salt is bad for your kidneys, laoda, and anyway, you’re going to be late.”

Liu Wei was right. They were two hours behind schedule by the time the Daughter docked into the ephemeral station-port of the Union of Autonomous Fleets, drifting in the volatile exosphere of the ice-wracked, toroid planet known as the Sixth Son. The Pearl River cut through the Son’s empty centre, eroding at its crust.

All the other masters of the Autonomous Fleets were waiting for her, gathered in the memory of her late husband, lost to the River, foolish as he had been to brave it without her. The entire clan of Cheng was present, those related to Cheng Yat by blood, and those who had simply taken his name out of loyalty. All of Cheng Yat’s sworn siblings and their spouses; all her tenuous allies now. They greeted her as she passed them on her way up to the dais: Cheng Sam, Cheng Ng, Cheng Loke, even Cheong Poh Chai, who raised his eyes to meet hers before coyly dropping his gaze.

“Tai Sou, you have struck fear in the Administration’s heart!”

“Tai Sou, the Viceroy’s death is a good win for us!”

Seck Woo raised her glass. “To my husband, gone to the Concubine’s fiery embrace, whose life unified us, and whose absence binds us even closer to each other.”

Together, they raised their glasses. If there were any present who might be entertaining thoughts of mutiny, today was an inauspicious day for it.

In the distance, the Pearl River heaved along a gouged-out chunk of crust from the eviscerated Sixth Son. An offering to the Concubine’s implacable flares.

Just like her husband’s remains, drifting toward the star.

Cheng Yat stood before her, limned in the spark and shadow of memory, silhouetted against the window of the pleasure-ship, where they first met. Beyond him, the River, its currents crunching like guttural machinery in the chambers of her brain. In the memory, he was smiling, caught in the middle of a silent transaction for power, unaware that her outstretched hand was not for him, but for the one behind him.

After the Salt is the winner of the Apparition Literary Magazine October Flash Fiction Challenge, which was based on the historical badass for October: Ching Shih. 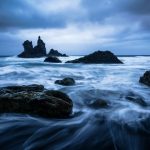 A Home for the Hungry Tide 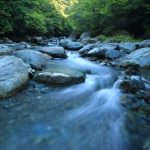