It was a grey day when the witch met her adversary outside of the city aviary. She dressed simply in a black wide-brimmed hat and the matching shroud that left almost too much to the imagination. He appeared in his ageless ashen plague-doctor mask, its short crow’s beak at the front. Though the witch could see his mask, she knew that to everyone else it seemed as if he wasn’t wearing it at all. Ever one for theatrics.

“Why are you wearing that ugly thing?” The witch asked.

“Because you’re a plague,” he answered.

“It’s a shame that over the years your creativity hasn’t grown an inch while your waistline keeps expanding.”

“If only your magic was as strong as your surly attitude. Maybe then you could smooth the wrinkles on your face,” he said.

The witch couldn’t help but put a bony finger against her cheek. He would always fly to her weak spots. His eyes fell on her hand and she instantly dropped it.

“Let’s get this over with.” He stepped closer to her. “This year I bought the tickets.”

“Good.” She took the slip from his hand and together they walked into the building in silence.

They always took their time inside the aviary. It consisted of three gaping rooms, which had been transformed to represent a different ecosystem. At the end of the hallway, they came to the lush jungle room. In the center stood a serene pond, water barely rippling under the legs of twenty pink flamingos. Toucans used their orange beaks to break off pieces of fruit from the branches. Macaws streaked the sky in a rainbow of deep royal hues. The cry of hundreds of jungle birds echoed in the air surrounding the room in song. This one would always be their favorite.

“What color is the bird this year? Pink?” he asked.

“You bought the tickets; you’re supposed to know.”

He rolled up his sleeves revealing black gloves. When he wiggled his fingers, they caught the light and seemed to almost steam. “I’ll get it.”

Her adversary calmly walked off of the designated gravel path and approached one of the flamingos standing in the pond. It ruffled its thick-feathered wings anxiously. He reached his hands out to grab the bird but it let out a cry of alarm before he got to it. All the flamingos raced across the pond away from him, churning the water beneath their feet. Though they couldn’t see the threat, they knew something was amiss.

“He’s gotten slow,” the witch muttered under her breath.

Despite the birds’ panic, her adversary persisted. Again, he tried to grab at the closest flamingo. It opened its beak to scream but in an instant the noise died in its throat.  At the touch from his glove, its eyes closed and it fell asleep.

“Toss me the bag!” he said in an urgent whisper.

The witch threw the thin black cloth at him. He bagged the bird and together they walked out of the aviary, unseen to the dozens of visitors that passed them by.

Once outside the building, the witch conjured her usual metal cauldron and willed it to fill with water. Her adversary gently eased the flamingo from the bag and set it down softly in the makeshift tub. He removed his gloves and cupped the water with his hands so it slid it onto the sleeping flamingo’s feathers. The witch did the same until the bird’s eyes opened and it hesitantly flapped its wings in annoyance.

“The spell isn’t working,” she said after a few moments. “I don’t feel life coming back into my bones.”

“The spell can’t be faulty. We created it! And we’ve performed it successfully hundreds of times,” he said.

“Then we must have made some mistake.” The witch stopped pouring water on the flamingo and placed her hands together to think. The bird looked up at her expectantly, silently willing her to resume her work. “Are you sure that we are supposed to bathe a pink bird this year?”

“I can check my calculations,” he answered. From the snack-pocket inside his coat he removed a crumpled sheet of paper. He unfolded it and held it far from his face to read.

“Losing your hair and your eyesight.” The words were out of her mouth before she thought them.

“It seems that you keep losing husbands. First me, then Greg, then Pierre…”

“You never remarried.” It wasn’t an insult but a statement.

“There’s no other woman who can create an immortality spell on the first date.” His eyes widened at the paper. “It’s supposed to be a white bird this year.”

“I can just paint it. I have some white spray-on hair dye in my purse.” She spritzed the flamingo.

“Let me run some tests, just to be safe.” He began to mutter in the ancient tongue.

Suddenly, the curtain of invisibility that surrounded them fell. People gasped at the ridiculous sight in front of the city aviary. The witch and her adversary looked at each other, unsure of what to do. The flamingo teetered between them frozen. Then all at once they fell into laughter, deep and strong and full of lifetimes of bickering and falling together year after year. They laughed until their sides hurt and then replaced the wall of invisibility that guarded them.

In a few minutes they finished the spell and life returned into their limbs.

“I’ll take it back,” the witch said, removing the now-sleeping bird from the birdbath.

“How wonderful that now the aviary gets to possess a rare white flamingo.”

“See you next year.” She turned to head back to the aviary when she stopped on the steps. She faced him and waved.

Her adversary waved back. In one hand he held his mask, and for the first time in years she saw his smile—bright and bold and filled with the life they had created.

Meredith Maloof is a Pacific Northwest-based writer interested in both fiction and poetry. This is her first published work.

Bird Bath by Meredith Maloof is the winner of the Apparition Literary Magazine March Flash Fiction Challenge, which was based on the featured image: Bird Bath by Leonora Carrington 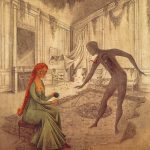 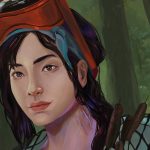