Crouched on the damp floor of her cell, the woman clutched a bundle of parsley, a contraband gift from the prison guard. She examined each leaf as if looking for an answer. The question, locked in her monomaniacal brain, vexed her every moment of the day. Will he return to bring me the taste I desire? Locked in her cell, there was little to do but wait. She feasted on empty hours and hungry thoughts. The sparse room grew cold as the sunlight dimmed and the bundle of paper-thin leaves wilted in her trembling hand.

The guard watched her, she knew. He harbored lustful thoughts that mirrored her own ravenous appetites. She chose him. Take a bite and he will see that I am grateful. She bit into the bouquet and found it bitter, empty of taste. She rejected the food, spitting out his gift in secret. He watched her from the other side of her door.

No one told the hapless guard, new to the prison, just why she was awaiting the hangman. What could the sparrow-like creature have done? Few crimes warranted the heavy chains and solitary confinement of a woman. She saw the blood that rushed to his extremities when he first laid eyes upon her. She clung to the shadows but the light still shone on her feminine curves. He spied on her while she slept, thinking she couldn’t feel his eyes feasting on her body parts.

Though she cried day and night for fresh food, she craved a different kind of hunger. The guard knew that trapped and deprived of her senses, she was losing herself. Her weakness complemented his power. Her pleas were an aphrodisiac. He liked it when they pleaded.

Perhaps a trade? The parsley was all he could find when she begged for fresh food. He smuggled in the fresh herbs and enjoyed her eager face, her grateful smile. He watched her holding his gift. Parsley and rue, she said to his confusion. She was mad, wasn’t she?

Would he come in to look at how these green leaves sparkled? She wished to thank him for the parsley. She knew he was watching her when he should have been at his post. They promised a trade.

She wanted to taste something.

She licked her lips.

The guard couldn’t resist her call. He passed through the doorway and forgot himself. His eyes took in the patterns scratched into the walls, but they meant nothing to him. The warning went unheeded. Her hunger was now his.

She held out her hands. The guard was lost in a dream, no longer in control. He was hers. The sparrow was a harpy. Her talons scratched and gouged. The mixture of fear and blood strengthened her body and spirit. Even an evil spirit needed sustenance. As he lay on the floor, losing his life, she dropped the parsley to the mixture pooling on the floor.

Finally, she could taste again.

J. Strawn grew up in New Jersey and the United Kingdom. She later moved to NYC to study literature, archaeology, and acting. After working in publishing for several years, she left to write full-time from her home in Southern California. You can read more of her work at www.tinballoon.com/ or Twitter: @strawn_ja 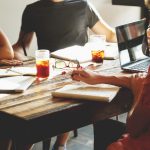 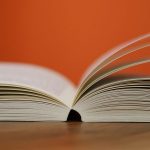