only a moment before the body

let life and lead out in the station rain.

Detective Li’s cigarette did not smoke.

From the body’s tattoos he took a clue:

One dead deer upon an altar. “Some clue,”

He spit and turned away from bone and blood

and spoke to comms: “Zealots got the deer.”

then go Earthside – if you’re not blowing smoke.”

Li bagged the man and walked back through fake rain.

The captain sighed and asked through her cigarette:

“You think zealots have the doe from this ‘clue’?”

All in a tattoo? You know about the blood

revel-” “Just not one more body,

okay? Get out, and find that damn deer!”

that bit at his suit and burned his body.

He followed the slick and abandoned trails

and dreamt of old Earthside ancestors:

had they killed deer, chewed upon smoked venison?

His daydreams died out and fled with the smoke,

on through the chewed up trees. Then in a clearing:

A whitetail doe and six zealots around an altar – blood

Detective Li’d followed his leads to the end,

to find the doe, now a butchered corpse.

The six shadows sipped blood from the body,

around them rose grey ghost pillars of smoke.

Li had followed the clues

to their conclusion: just a dead deer

soaking with the superstitious in the dead rain

with no prophecy fulfilled, even in blood.

Li left the zealots with their dead deer,

On the shuttle back he lit a cigarette

and dreamt of blood. 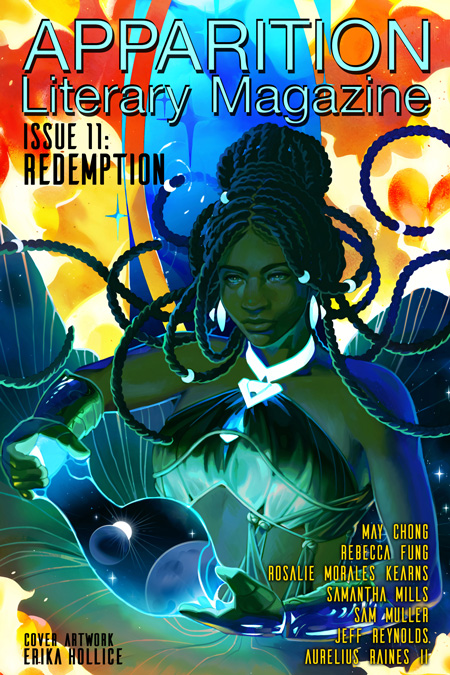 Join our Patreon Campaign
Become a Patron!
Recent Posts
Follow us on: