Last time I tried to escape, I made it as far as the blueberries. Plump and deep blue, glistening like they’d been waiting for me. I reached to pick one, and Father caught me from behind. Hauled me inside. Dropped me on the kitchen floor like a bag of sugar.

“Anywhere,” I spat, and he chuckled.

“Oh, Thea. The world would devour you.”

My own face glared back at me from his mirrored glasses. I longed to be devoured by the world. To feel its teeth in me. I looked at the door behind him. Father was only a head taller than Mama and me, but somehow he towered over us. His gaze cobwebbed the windows. The walls carried our voices to his ears.

That night, Mama sat on my bed and removed the burrs from my hair. “When are you going to stop this?”

I looked at her, thickset and plain, etched with sadness. Last fall, she sat among the diseased pumpkins in the garden and touched the rotten places. Next morning, the vine was waxy and green, the pumpkins ripe. I scraped one out and roasted it while Mama lay in bed, listless with fever. I thought she was dying.

“He’ll chase you,” she said, plucking out another burr. “No matter how far you go.”

She clucked her tongue dismissively. But I could tell she was thinking about it.

His words, straight from her lips. I turned away, pretending to sleep. Mama stayed for a long time, combing my hair into silk, her grief heavy.

She dropped two links into Archer’s bowl. Then she served me a grapefruit and one thin slice of cheese. I looked at her, confused.

“I’m sorry, Thea,” she said. “But you’re almost bursting out of that dress.”

I couldn’t speak. Mama served herself modest portions of everything. I smoothed my dress and stroked Archer’s soft fur under the table.

Dinner was braised pork, blistered green beans, and whipped potatoes. Mama placed three shriveled beans on my plate. I tossed all night, hunger drilling a hole through me. The next morning, Father feasted on bread pudding and berries doused in syrup. My breakfast: two strawberries.

I refused to cry. Archer reared up and rested his warm head on my lap.

I nudged Archer, but he ignored me. Then Father’s foot lashed out. Archer fled, whimpering. Father swore, yanking at the laces of his boot.

“Too tight,” he grunted, throwing the boot in the corner.

Mama said maybe his feet were swollen from the heat. Father sent us both upstairs before I could even taste the berries.

“Why are you doing this?” I pleaded that afternoon, as Mama and I sewed together. That was all she’d been doing lately—cooking and sewing.

“It’s for your own good, Thea. Can you believe me?”

I couldn’t. As the days crawled on, the mountains of food grew so big that Mama seemed to be shrinking. My portions dwindled to almost nothing.

“I always wondered if your mother would come around,” Father said quietly, while Mama washed the dishes. His feet were propped up on a chair, toes poking through a hole in his socks—he’d given up on the boots. His glass of vermouth looked like a thimble in his massive hand. I nibbled my asparagus, wondering if hunger was making me hallucinate.

After dinner, Father went straight to bed. I tried to sleep, but Mama’s sewing machine whirred and rattled into the night. Finally, I wandered down.

Mama was hunched at the table, feeding gray tweed through the machine. It took a few seconds to notice that she was sitting on a stack of books, and that her face was no bigger than a plum.

I ran to her side. She pointed at Father’s favorite jacket, splayed open on a chair.

I nodded. She’d gotten so small that she couldn’t reach the foot pedal. I took over. By the time I was done, the thrushes were singing. Mama stood on the stack of books so that she could reach my cheek to kiss it. Then she bustled upstairs with the clothes.

Sunday brunch. Father towered like a ghoul. He was nearly as wide as the table, eight feet tall sitting down. The new jacket strained at his shoulders. How could he not notice? Or had we always seemed this small to him?

It was the prettiest meal she’d served since Easter. Duck à  l’orange, warm beet salad, dark chocolate cake with raspberry cream. I loaded Father’s plate. From behind the impenetrable lenses, I could feel him watching me.

“What a fine young woman you’ve become,” he said.

“Thank you,” I said, not daring to look at him.

He ate and ate. An hour later, when I walked out, it was with Mama sitting on my shoulders and Archer trailing happily behind us. Father put his lips to the doorway and bellowed—he had to get down on all fours, spine curved, in order to see out the opening.

In the garden, we stopped for the blueberries. At first, Mama had to bite into them like apples, but soon she began to grow. We ate until our lips were stained.

We set out, the world ours to devour.

Lindy Biller lives in Madison, WI, with her husband and two kids. In her day job, she works as a writer and editor at an educational game studio. When she’s not writing, she enjoys exploring with her family and drinking too much coffee. You can find her on Twitter @lindymbiller.

The Banquet by Lindy Biller is the winner of the Apparition Literary Magazine September Flash Fiction Challenge, which was based on the featured image for September: From Portrait de Famille (Family Portrait) by Dorothea Tanning 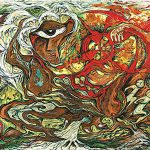 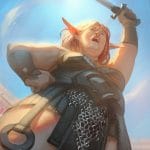