In a windowless room on the lowest level of an ancient space vessel sat a Navigator, who could traverse the galaxy within her mind, charting courses to worlds ideal for seeding and cultivating intelligent life.

Her latest discovery was splendid. This planet had vast oceans under azure skies full of puffy white clouds. The landmass offered diverse climates and terrain, where various creatures were thriving. Rotating on a tilted axis and in an elliptical orbit, the planet would experience weather cycles, which were useful in helping developing civilizations gauge the passage of time.

A gem in the cosmos. The tendrils on the Navigator’s hat quivered with delight.

“You see it more clearly now?” came a voice to her left. It was Myra, her mentor of many years—a skilled Navigator in their own time, now losing the gift as their mind sealed with age.

The interruption pulled the Navigator out of her vision of the planet, but she did not mind. “Indeed. Many plants and animals have evolved there in abundance.”

“You are pleased with your discovery.”

This was a harsh critique. Navigators were meant to be objective, to evaluate new worlds based on specific criteria. They had the gift, but it was the Cultivators many levels above who would do the hard work.

“No. I am satisfied that it’s a viable candidate.”

“Never be satisfied. Remember that you are not looking with your eyes. If you let your mind warp the truth, you cannot see crucial details. Dangers. Look again, and remain skeptical.”

The Navigator did as she was instructed, reaching into the cosmos once more. The tendrils on her hat swayed and pulsed, helping to guide her focus. In her mind, the galaxy rendered as a glittering stew, a great vat of stars, planets, and dust, all stirred into one irresistible mixture. Deeper into the vision, the soup became a glowing network, composed of infinite pathways that opened to her, toward so many star systems. Toward so many possible worlds.

Having located this specific planet once already, her mind was drawn to it, as if pulled by a magnet. A blue jewel orbiting a strong star, it felt precious to her, so full of potential, so lush with life. Lovely.

Not lovely; she had slipped. This was simply one orb among multitudes. Looking closer, she swept across its lands again, taking on the vantage point of a flying creature. The life forms there were varied—some flew alongside her, some were tall enough to eat leaves from tall trees, some hunted prey below . . . Oh.

Her hat tendrils curled inward. She could see now what she’d missed before.

She answered without losing the vision this time. “There are natural predators. Large, reptilian. Carnivorous.”

The Navigator let the vision go. Myra hummed beside her.

“Not yet. Share with me all you have seen.”

The Navigator hesitated a moment before she fulfilled the request. Her hat tendrils flared outward, projecting the images into the space before the two of them. The oceans, the landscapes . . . the massive beasts tearing into each other’s flesh.

The Navigator ended the projection. “Mentor?”

“The planet is ideal indeed, as your prior assessment indicated.”

“But it is already inhabited by a dominant species. . . . One that might evolve to intelligence in some millenia if left undisturbed?”

Myra turned to face her, then, their gaze severe beneath the standard conical hat. “Are you advocating for these creatures, Soli?”

The Navigator squeezed her thumb. “No, mentor. I am stating facts about the conditions of this world. To be certain we have a complete understanding of it.”

“Good.” Myra resettled in their seat. “Then let us submit this candidate to the Cultivators.”

For a moment, the Navigator felt an odd glimmer of hope that the planet would ultimately be deemed unsuitable—a perfect opposite to the pride she’d felt earlier, and twice as inappropriate.

Days later, word came that the planet had been logged and charted as a future potential: Not ready now, but well worth revisiting in time. The Navigator inwardly scolded herself for feeling relieved.

“You are becoming a fine Navigator,” Myra said. “With time, it will grow easier to stay neutral.. In truth, many of us struggle with fondness for our early discoveries.”

That knowledge brought some comfort. “I am grateful for your council, mentor.”

“To aid you in practicing objectivity, do turn your gaze back to the planet.”

The Navigator did not let her surprise show as she once again reached her mind toward the world of reptiles. Only now, she sensed something was different. Something was moving with her. On a similar trajectory. An asteroid.

At once, she could envision the impact, the destruction, the consequences for the atmosphere—she understood the plan the Cultivators had put in motion. Fires would devour landscapes, smoke would choke the once-blue sky. The dangerous reptiles would die so that a new, weaker species could be safely cultivated later on. In discovering the creatures’ homeworld and allowing herself to be pleased with it, she had set their fate in motion.

The tendrils on her hat remained perfectly still.

Alicia Haberski is a lifelong Texan who discovered a love for stories and storytelling at a young age. In particular, she’s always loved stories that invited her to experience new worlds, eras, and technologies. At any given moment, she’s probably daydreaming about outer space, wishing it would rain, or snuggling with her cat.

The Navigator is the winner of the Apparition Literary Magazine July Flash Fiction Challenge, which was based on the Photographer/Image prompt for July by Coreen Simpson 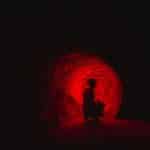 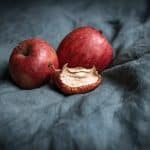