The text was laced with magic, shiny and toxic as lead. She cast her most potent spell on it—longevity—and then bound its fate to hers.

Mesopotamia. Terrified, the tribe wrenched open her mouth and filled her stomach with hungry insects. The creatures burrowed through the softness of her eyes, her tongue, the lining of her throat. As she died, the lines of the grimoire twisted, just like the insects gnawing at her gums.

I am sorry this is such a horrible story.

The witch was no more. The grimoire, however, aged well.

Time passed, and it lost its jagged edges. It went south, then west, where it began to stink of heat and river mud. The original stone thinned into a grid of thatched papyrus stems. Then it curled, wrapping its curses warmly in each other.

Alexandria. The young scribe pulled the scroll from the shelf. He had to stand on tiptoe to reach it. He moved nervously, uncertain of whether he was allowed in here, his eyes flickering back towards the entrance. In the shade of the library, he had to bend close to read the symbols. His nose itched, and he blinked hard to stave off a sneeze.

(That’s how it always begins: the familiar tingle.)

Only when they began to treat the body, to remove the organs for preservation, did they realize it had been eaten from the inside out.

If I had a better story, I would tell that one instead.

The grimoire moved north. Took on the greasy feel of untanned goat hide. Blacker than darkness, the ink glimmered in the candlelight. It smelled of hot earth and heavy stone. It echoed the low intonations of prayer.

Monte Cassino. The monk was alone, as he often was. He was old, and his body groaned as he reached for the manuscript chained to the library shelves. They were precious, these volumes. The monks could do without food, without shelter, without clothing—but they feared the theft of their books.

The text was coated in a fine layer of dust. The monk sniffed sharply, then wiped his nostril with the back of his sleeve. A broken bug leg clung to the green snot. It’s time to go to evening prayer, he thought.

His brothers found him face down, blood coloring the ink spilled across the floor.

I regret that it could not have ended differently.

The grimoire softened to cloth, then lightened to paper. It grew thinner, cheaper. It crossed an ocean. It was patient, as evil things often are. No need to be greedy.

Washington, D.C. The librarian stood at the card catalogue in stockinged feet, her heels primly on the floor beside her. Just these last few files, and then she could go home. She frowned at the sight of a misplaced book, disrupting the order of her shelves. Running a finger over its spine, she sneezed. A drop of blood decorated her hand when she pulled it away.

It was an obvious DOA. They drew a sheet over the stretcher in the stacks. I’ve never seen anything like it, said the paramedic, and he wept into his hands.

What’s a book, if not a parasite that burrows through your eye? What’s a phrase, if not an animal that cuts into where you’re soft?

What word, once read, can ever be unread?

Only now did the grimoire hesitate, wondering at its next transformation. Where to go, what reader to infect.

It began to glow, a pale blue light. It moved north. And east. And south. And west. But by now you know the story. Perhaps you feel it, the ghost of an itch somewhere behind your right eye.

The grimoire hums, or pings, or vibrates, and occasionally it glitches, the curses frozen on the glass before you can scroll away. A low, electronic buzz. A familiar heat in the palm of your hand.

This is nearly all I have to say.

The witch bound the grimoire’s fate to her own.

Haven’t you wondered who’s telling you the story?

Emma Miller is a writer and editor in New York City. Her journalism and tech writing has appeared in USA Today, Forbes, Time, Money, CB Insights, and more. She studied English at Columbia University, where she received the Williams Traveling Fellowship and the Karen Osney Brownstein Writing Prize. 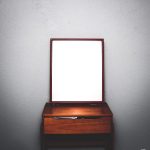 Sides of the Glass

Not What This Is Really About