You were not made for sadness, grief, or love. You were built to burrow into the skin of asteroids and fill yourself with their riches. Yet here you are, at a precipice, standing before a door, feeling sadness, filled with nothing but grief, warmed by the mechanical churn of love in your belly.

You do not know why you have pulled a dress over the writhing steel of your frame, other than that Velvet said you would feel good in one, smiling that sunrise smile of hers, while she repaired the part of you that filtered stone from fine mineral.

You do. Her being right, yet again, in the ways of your heart, feathers her into existence for just a moment. The wind shifts and brushes the fabric across your frame. Your haptic feedback was not made for pleasure, the sensation of goosebumps, or the ability to calibrate your force so as to safely touch and hold a human. You were built to maintain surface stability and recognize atmospheric conditions. Yet here you are, a dress against your skin, in a dance with the wind, feeling as if her hand was touching your steel.

You hear a noise from inside the house. You steady the friction of rapid processing, then tap the door with the last part of you she touched; the diamond tip of your drill. The noise inside organizes into footsteps towards the door. You brace.

You were not built to carry a weight this heavy. You were built to take precious minerals from the ground directly into transport ships. Yet here you are, and the door is opening.

“Mx. Nightsmith, my name is Cassandra,” you say, “I was your daughter’s friend and coworker. She died on Friday. I’m so sorry. She changed my life and I will never forget her.”

They put their hand to their mouth and tears fill their eyes. You were not made to know heartbreak, but you see it on their face, just as you felt it days ago. They invite you into their home, and you note the rich red curtains, and a small coffee table with condensation circles in the wood. You are prepared to hold them if they cry, though you were not made for this. You have done many things you were not made for, with Velvet’s encouragement. You have danced and known music. You have carved your name into the wall of your charging station, and you have come here.

Velvet’s parent asks if you’d like to sit on the couch. You remember her pulling you from the field mid-shift, lying and saying you needed to be repaired, then laying on her back and gesturing up at the sky. You laid down beside her and turned everything but your mind off and rested. They come back from the kitchen with a holoprojector and sit beside you.

“Would you like to watch recordings of her while we talk? May I ask you questions?” they say.

You would and they may.

You never imagined Velvet as a child. To you, her certainty and strength seemed eternal. In your mind she could have only arrived like Athena, bursting fully formed into the world from some god’s head. Yet there she was. Her arms were slightly too long for her body, gangly and uncoordinated as she ran across a soccer field. She stopped over a fallen player with a different colored jersey and helped her up. Perhaps she was fully formed in all the ways that mattered.

“She was always so kind,” Mx. Nightsmith says, smiling through the tears, “You say she was your friend?”

“She was my best friend.”

“How did she change your life?”

“She promised me I had one, and showed me how to use it. When it comes to the ocean of living, she will always be my guide, like Polaris” you say.

You watch the sadness lodge itself in their throat, a stone so large even you cannot process it.

The hologram switches to a recording of Velvet as a teenager walking on her hands. The first time she met you she’d been asked to troubleshoot why your input speed was lagging. She found nothing wrong with your machinery, so observed your work in the field. Occasionally, after breaking the stone and pulling it into your processor, you would pause, with the silt dangling on the precipice of your conveyor belt. Just a few moments that accumulated over time. She asked you about it in the privacy of her repair room.

“Why do you leave the stone in your mouth for a moment longer than you need to?”

“Because it is beautiful,” you said.

You were certain she was going to kill the part of you that found beauty. Instead, she hacked your input monitor so it would register higher speeds than you produced. She sent you back out with a wink. She treated you like a friend and a co-conspirator, and you have never been the same.

You try to tell her parent this story, but now the stone is lodged in your throat, too. You turn your head to the hologram. Mx. Nightsmith leans on you, resting the ride of their head on your shoulder. They let the tears come now in rivers. You don’t mind.

You were not made at all. You were discovered. First by Velvet, in that repair room, and then by yourself, as you gave yourself pleasure, as the voice inside your head grew louder and louder until it spoke to you in sentences, like these, as you cracked into the silt and boulder of loss, as you felt parts of you break that had no hardware. Yes, even her going was a gift. You lean back into her parent and let the sadness, grief, and love wash over you both as Velvet walks from hand to hand, like she is holding up the entire world.

Spencer Nitkey is a writer, researcher, and educator living in New Jersey. His writing has appeared in Apex Magazine, Fusion Fragment, Metaphorosis, and others. You can find more about him and his writing at spencernitkey.com.

You Were Not Made For This is the winner of the Apparition Literary Magazine April Flash Fiction Challenge, which was based on the Photographer/Image prompt for April: Toshiko Okanoue 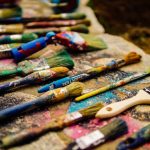 While Alice Sleeps in Wonderland 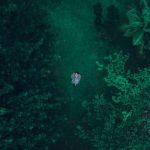