Galahad delivers the announcement in a faint Scottish accent. In focus groups, 73% of customers agreed it was the most endearing. He is five feet tall⁠—which 68% of respondents felt was the optimal compromise between functionality and approachability⁠—and metallic, which 81% said was the most appropriate colour for a mechanoid. But, then again, 44% questioned whether focus groups were an accurate method of gauging consumer preferences.

As Galahad shuffles down the aisle, he repeats this message on loop.

Not that any of the passengers are listening.

It’s always the same on these long-distance trips. Most are plugged into VR rigs, and with their IV drips running up into the luggage racks and chargers pulled taught into the power sockets, they look like diodes soldered into place. Unopened meals sit patiently on their tray tables as still and silent as the passengers. Three hundred and twelve portions of nutritionally balanced carbonara, and fifty-two vegetarian lasagnes.

“Ladies and gentlemen, we apologise for the delay⁠—”

To pass the time on these boring, trans-oceanic journeys, Galahad and the vending machines would take bets on which passenger would be the first to stand. Galahad was banking on the woman in seat 32A of Coach F. She had a face like a sprocket: round, flat, and with a set of teeth that seemed to point in all directions. The drinks machine had chosen the gentleman in Coach A in the suit three sizes too big, bones supporting sagging cloth like a circus tent.

“He reminds me of the last winner,” she had explained.

So far, there had been no movement.

“⁠—and we apologise for the delay in this apology.”

In a way, it was good that the passengers were quiet.

If they’d asked him, he would have to reply honestly; he didn’t know how long they would be stationary. All his sensors told him was that the overhead power cable was not currently live, that they were running off solar backup, that the milk in his abdomen’s fridge had expired, and the loo roll in Coach D needed replacing.

Galahad reaches the end of Coach A, turns, and starts another lap of the train.

Still, it was a shame they were missing the view. This stretch of track was one of the most beautiful in the British Isles⁠—connecting the island of Cambourne to what remained of Norfolk. To the left, the southbound bridge was stark and spindly against the evening sky. To the right, a flock of gulls wheeled and dived. The gulls were the only ones who had welcomed the rising seas. Them and the houseboat salesmen, Doc Munroe had said.

There had also been gulls outside the window of the lab.

Once, on a hot summer evening when Doc Munroe had rolled up her lab coat sleeves and Dr Kelly had taken hers off entirely and there was a risk of his coolant system failing, they had left a window open. Then there had been a gull in the inside of the lab. Galahad was surprised by how small it was, how white against the blue seats of the training carriage. It coughed up some red water and went very still. Galahad had never seen one do that before. It was very exciting. He made it a macchiato.

But when Doc Munroe and Dr. Kelly arrived in the morning, they weren’t excited or impressed or pleased. They seemed angry.

“Why have you done this?” they asked.

“74% of customers with a BMI under 20 prefer espresso-based drinks.”

He knew how to rehydrate and microwave all of the meals on the Premium Traveller Menu, the optimum temperature to serve twenty-three different types of tea, and the three least offensive ways to ask a passenger to stop vaping. He knew how to use UV light to kill off the flies, how to log cleaning faults⁠—like the dust he’d found on the window sills⁠—and how to calculate the fastest route to anywhere on the Epsom network. Thanks to his last language patch, he was even able to understand idioms, similes, and clichés⁠—realising that metaphors are a lot like buses. You wait ages for one to come along, and then someone uses it in an analogy.

“We’ve taught him everything he needs, Sarah.”

“What if something goes wrong? He won’t know what to do.”

“Well, he won’t be on his own. He’ll have two vending machines, and a sat-link for emergencies.”

The next day, Dr. Kelly did not come in.

It would be another hundred years at most.

And if there ever was an emergency, he could always use the sat link. 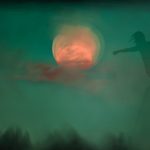 The Hunter Speaks His Name 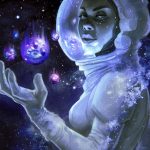