Bioluminescence flares beneath my fingertips, vivid blue-green against the dark mirror of the water’s surface. The boat thrums and a comet’s tail stretches in our wake, swirling and churning as it dissipates. The city ahead glitters with a vibrancy no photograph can capture, an array of colors and lights.

I never thought I’d make it. Not after Dr. Lambert handed me my orders. I still carry the letter, a thick sheet of military stationery creased into perfect thirds and tucked in my back pocket.

A temperature warning flashes before my vision. It’s the tiniest bit of light across my irises but clear as a neon billboard. The opaque silhouette of a male human appears, the right extremity highlighted blue with a familiar line of sterile text beneath it.

I withdraw my hand. The temperature reading rises to within normal parameters and the warning clears. I inhale deeply and sigh, the briny scent of the ocean burning my nostrils. My main processor indexes the aroma into my olfactory database.

Nine other cyberunits sit huddled together on the boat, the hoods of their jackets pulled low, their blankets clutched tight. It’s a human mannerism to which they still cling. Cold doesn’t register the way it used to. Like heat or pain, we only know it’s there because our diagnostic systems run a sweep every ten seconds. The information gets routed through our neural networks and into the databanks implanted in our brainstems. Capable of maintaining a whopping seven petabytes of data, everything stored is instantly accessible by the Central Core.

We haven’t been human for months now.

Only 39.7% of my biocomponents remain, most of them vital organs. Brain, heart, lungs, things that were enhanced rather than replaced. The government wanted to retain the “human element” when they made us. Keep the adrenal glands for that fight-or-flight response, the brain for empathy, the heart for pumping coolant the way it used to pump blood.

We are the incompatibles. Those that agreed to undergo the surgeries, to give our pound of flesh for the greater good. I can’t remember the taste of food or the pleasure of touch, things deemed non-essential when developing the perfect supersoldier. Each and every one of us signed the ninety-two page contract, agreeing to the terms and conditions, waiving every human right we ever had. We thought we knew what we were agreeing to. Get “upgraded,” serve two tours on the front lines, and our families would sit pretty until our kids had kids of their own. Live or die, they got their money. And with the cybernetic enhancements, survival stats were very good.

It was a damned shame nobody mentioned the failure rates. But that’s the stuff they keep out of the public’s eye. The 8.6% of conscripts that undergo the procedures, the months of physical therapy, the combat training, the psych evals, get hooked up to the Central Core…and nothing. They think it’s something in the theta brainwaves, but the Central Core scientists have yet to confirm. They only know one thing for sure: they made us faster, stronger, smarter. They made us into weapons, and the Core can’t wrap their greedy fingers around our triggers.

So each and every one of us got our deactivation orders on thick, military stationery, sealed with the Republic’s coat of arms.

We are not machines. And we will not be deactivated.

The cyberunit at the back kills the engine and we drift silently to the shore, a ghostship in the night. The boat rumbles as it rolls onto the gravel of the bank and two of the units jump out, pulling the small vessel onto the rocks. We are well away from the glittering cityscape, sneaking onto a dirty grey beach littered with glass bottles and seaweed clumps. In the distance, I see warehouses and shipping containers.

“Come on, up there,” someone whispers, low and urgent. As one, we rush up the sand and onto the pavement above, making our way toward the labyrinth of metal boxes.

Light hits us from every direction, chaotic and blinding. Red, blue, blue, red, whirling, headlights, shouting. The clickclickclick of cocking guns, one after another. The rhythmic thrum of stealth chopper blades buffet us and great beams of light blast down, encasing us in tight, white cages. A man’s voice rises, tinny and crackling as it is amplified over the din.

“Cyberunits, you are ordered to stand down. Get on your knees and put your hands on your heads.”

The Central Core. They will disassemble us. Dissect us for study. Try to isolate the variables in our brains that make us different.

We are a liability in their eyes. They’ll have their orders to collect us and bring us back for deactivation.

The unit to my right tenses, fists clenched, and I know she is planning to run. I catch the telltale glimmer across her irises. She is calculating trajectories, statistical probabilities. I reach out, grabbing her fingers.

She wrenches away, turning her back. Hands go up around me and I do the same, lifting my palms to the sky, lowering myself.  The chopper blades shake the earth beneath my knees.

Red, blue, blue, red. I close my eyes and draw up my recent memories, sifting until I find the one I want.

It smells like hope, and I cling to it, picturing the water playing through my fingers. Imagining how it might have felt, silken and cool against my skin.

I access my clock, pulling up the timer that’s been running from the moment we all broke free of the medical facility. They chased us with tanks and guns, shot eleven of us down.

The digits flash across the insides of my eyelids.

For fifty-three hours, nine minutes, and forty-one seconds I was free.

Breanna (Miko) Teramoto is an unabashed coffee addict who enjoys traveling, delicious food, sci-fi and horror movies, and spoiling her pets. In her spare time, she can be found writing, reading, gaming, listening to an eclectic array of music, and crafting flimsy excuses to visit her local bookstore for the umpteenth time. Updates on her latest adventures can be found at mikosmusings.com where she enjoys blogging on a variety of oddities and general whimsies.

<53:09:41> by Breanna Teramoto is the winner of the Apparition Literary Magazine May Flash Fiction Challenge, which was based on the featured image for May: Migrants No Entry by Chinwe Ifeoma Chukwuogo-Ro 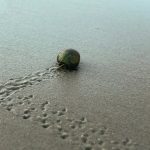 It's Ok to Cry During a Pandemic 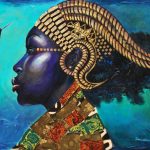