Every time there was a death, Mephe saw a hummingbird. When Mephe was small, she thought it was just a coincidence, but it happened so much that she asked her grandmother about it.

That was all she said, but the next night she called a backyard feast—just their family and close friends, a few neighbours, Mama Blue, and the girl from the house next door who turned up unattended except for a lizard she was calling her pet. When everyone had drunk and ate and danced, her grandmother made her wheelchair rise up from the ground to make the announcement. “Mephe seen the hummingbird,” she said.

There were gasps. Mephe’s mother started crying, her father made a toast, saying he was proud of Mephe, that he always had been, and that he always knew she held great promise, even as a baby. This last part was untrue, but Mephe knew better than to correct him in front of company.

The next day Mama Blue came round to the house before school. She laughed at Mephe’s uniform. “You won’t need that where we’re going,” she said. “Go put on something comfortable.”

“Where we going?” said Mephe.

Mama Blue tapped the side of her nose.

Lesson One was held in the choje tree. Its trunk, although not smooth, was sparse, and it did not exactly invite climbing. It was lunchtime when Mephe finally got up there. Of course the girl with the lizard had made herself small and climbed on the lizard’s back and he took her up the tree in a matter of seconds.

“Should I get a lizard?” Mephe asked Mama Blue quietly.

The girl with the lizard laughed at her. “You can’t get a lizard,” she said. “Lizard gets you.”

“It may not be lizard though,” said Mama Blue. “Could be anything. You got to keep your eyes sharp for it.”

The next week Mephe kept her eyes sharp for it. It might not be a lizard, but she was surely not going to do anything to put any lizards off, so she was quiet around them, making room for them to approach her, leaving little trails of water in the red dust dirt outside her home in case they wanted to bathe or drink or play. But no lizards came for her.

The longer Mephe went without a lizard or some equivalent, the more the girl with the lizard laughed at her. The girl and her lizard went flying out on night journeys, and during the daytimes, Mama Blue let her oversee deaths and births and the more complicated types of illness. Mephe had to watch.

“Your time will come,” said Mama Blue when Mephe complained. “Big things come to those who wait.”

And then it happened. Mr Pepper died. He was the kind of man whose days were numbered since the beginning but who had been holding out for an argument with his wife, which had taken thirty or so years to complete. The day she let him have the last word, he dropped dead from his chair and the girl with the lizard flew in to wash him and wrap his naked, cold body in mud.

And there was a problem. Their house was filled with the stench of ultimatums and stale promises, and his wife still had her last comeback trapped inside her teeth. The hummingbird would not enter such a home. The hummingbird was at the window with refusal written into its beak.

“We’ll have to take the body outside,” said Mephe.

But Mr Pepper was enormous. He was over nine feet tall and full of muscle. In his last year of life, his lung had collapsed six times for the sheer effort of pumping air round such a huge body. His widow refused to help carry him, and Mama Blue had made herself scarce as she always did when she saw a teaching moment before her.

“Just get the hummingbird in here,” said the girl with the lizard.

But the hummingbird remained outside the window, not coming in even for the skeleton amphora of protea the girl with the lizard carried round her neck.

So Mephe picked him up. It was only when she got him outside, so the hummingbird could guide Mr Pepper’s spirit through the treachery of the underworld that Mephe realised she had not, as she thought, developed a superhuman strength to carry Mr Pepper out on her own. It was not adrenaline, nor was it a sudden gust of carrying wind, nor was it Mama Blue. It was a dragon. Her very own lizard. Her pet.

Laura Barker is a writer, artist, and facilitator. She runs a queer black writing group in London, UK. Her work has appeared in The Guardian and her YA novel Picnics was shortlisted for the Faber Andlyn BAME (FAB) Prize. She is an Aries Taurus cusp.

Hummingbird by Laura Barker is the winner of the Apparition Literary Magazine June Flash Fiction Challenge, which was based on the featured image for June: CONQUEROR by Tamara Natalie Madden 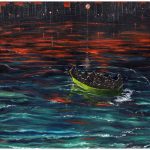 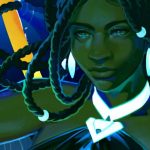