He had been the wrong kind of prince—a frog prince; a prince from the sort of fairy tale that no girl had ever wanted.

And just when she had begun to suspect, a little, from the cadence of his blinks—and many other small things—that something was not right, he had disappeared, with a lumbering hop, out into the marshlands, never to return.

The frog baby—his baby—was green and neckless and had webbed toes. It rejected her breasts; it did not want her milk.

“Ontogeny recapitulates phylogeny,” the baby ribbited solemnly, defensively, after she had given birth to it.

It had been born young, after just four months. And with its little speech, it seemed to assert that its awful abnormality was the result of its prematurity, and not something more inherent. As if it had been born just a bit before that point, where most babies cease to be frogs. Otherwise, see, it would have been perfectly normal.

As if–goddammit–there were such a point.

“What a little twerp,” she thought. “What a shameless liar.”

But, instead, she said, “Oh.” And, with an effort, grinding her teeth, she converted the flame-hot flare of her anger into sadness.

Princes deserve respect, after all. And she was only a peasant. So she tucked her swollen breasts away, and fed it flies and filth, for years, until metamorphosis set in, and it became, in fact, more-or-less a boy, with cold lips and slow eyes, precisely like its father’s.

The Horrors of the Unseen 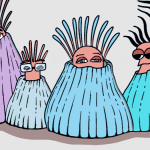