There’s that scene in horror films. You know the one. The camera is focused on our hero and behind her, just out of focus is something–a killer, a ghost, an alien, a babadook–it doesn’t matter. All that matters is that we see it and she doesn’t. There’s a knock, a noise, a slip of a shadow, and she turns. To find nothing.

The jump scare is coming. It’s a flick of the eye away.

That moment, between what is seen and what is beyond human sight, is tense. It’s a primitive terror. Think back to your childhood, hearing a bump in a night or a creak at your door. The only solution is to hide under the covers, blocking whatever is lurking beyond from your view. You can’t control the thing, but you can control if you see it. Or at least, that’s what you hope.

The Dr. Who episode Blink captured this feeling brilliantly. The villain of the week is an alien race referred to as The Weeping Angels. They look like statues and only move when the object of their terror doesn’t blink. The horror comes when you look away, and when you realize the monster can only be stopped by facing it–and your fear–head on.

Even without blinking, it’s an impossible task. There’s a phenomenon known as saccadic masking, which occurs when we dart our eyes back and forth. The eye is moving quickly (the saccade), creating a motion blur. Rather than rely on what the eye is seeing as it moves, the brain overcompensates and masks it. We don’t perceive the gap because the brain superimposes another image. In that moment, as the brain replaces your sight with an image that’s not actually what you’re seeing–you’re effectively blind.

You’ll be in the middle of something, and flick your eyes up to an analogue clock on the wall to see what the time is. The second hand of the clock seems to hang in space, as if you’ve just caught the clock in a moment of laziness. After this pause, time seems to restart and the clock ticks on as normal.

Saccadic masking has been a scientific curiosity since its was first described in 1898. Even if the phenomena hasn’t been widely discussed, the idea what we can’t trust our own eyes, that there’s something just beyond our line of sight, is a staple of the horror genre. Some of the best horror films are the ones where the villain is never fully seen. Instead of puppets or CGI, the horror and scares remain mundane. Fear is grounded in noises and action, without the accompanying image the audience is forced to conjure their own nightmarish creature. The Conjuring film series, based on the investigations of Ed and Lorraine Warren, excel that these moments of dread. The horror of the hauntings come from doors being slammed shut, chairs rocking on their own, the sound of the clapping echoing back. The audience can’t see what causes these noises, which adds to the horror.

Film is a visual medium, making it easy to translate these moments of known/unknown, seen/unseen. Jump scares rarely work in novels. Instead, the author drags the reader to the horror, slowly coaxing them into the terror of the situation. Whether it’s an author with a broken leg and his obsessed fan, from Stephen King’s Misery, or a boy scout troop stuck on an island in Nick Cutter’s The Troop. The fear is lowkey and static, until it moves.

You can’t tell someone to be scared. You just have to shove the reader outside the firelight and hope that what you’ve hidden there in the shadows does the trick.

Chuck Wendig, 25 Things You Should Know About Writing Horror

Clapping and rocking chairs may work in films, but with horror novels, a reader may misread a tense moments as just a bit of wind. Joanna Briscoe’s article How to Write a Modern Ghost Story, describes how ambiance should take precedence over realism. Since jump scares don’t work in novels, instead the writer needs to harness the tense knowledge that there’s something beyond the seen.

The power of a ghost story lies in what is feared beneath the surface of the narrative, terrors glimpsed or imagined in the cracks, rather than what leaps out of the shadows.

Joanna Brisco, How to Write a Modern Ghost Story

Often horror can get lumped with torture porn. Stephen King vacillates between slow, wrenching terror to bloody entrails. It could be The Girl Who Loved Tom Gordon, a horror novel about a young girl lost in the woods who is positive that someone is watching her, or Pet Semetary. Gore and torture can be a trigger for a lot of readers. In fact, when the horror gets too visceral, I’m likely to turn off the TV or close the book. However that slow fear that there’s something behind you, is gripping. It doesn’t matter what nightmares haunt me later, I need to know what’s just beyond my line of sight. I want to know what you see and I want to know what sees me.

The reader also needs to see the horror, but there must always be something that’s just beyond. In writing, it can become subtextual. The horror can become a manifestation of something within the main character that they had never seen, or realized, before. Similar to horror movies, suspense can also be wrought from the idea that the reader knows more than the characters. The reader knows the sewer grate hides a demon clown, but the character doesn’t. It’s beyond their field of vision. They can’t see the coming horror, they just know that there something isn’t quite right.

Horror is a multilayered genre. It stretches between fantasy and science fiction easily. Horror has us guessing at what’s under our beds or locked in the basement. Artful suspense is the key to writing unsettling horror fiction. The best way to build this is by understanding what the reader sees, what the characters see, and how to exploit both. True horror lurks in your blindspots, waiting to jump.

If you want to write something chilling, start with what’s just out of your line of sight. Now close your eyes and tell us what you see. 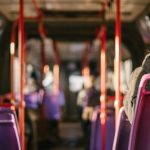 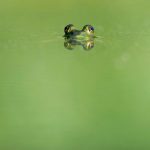