When I step out of the darkness, I bring the shadows with me. Your world is not ready for such things. I paint everything black with the reflections of what is hidden within repressive souls. That is why you always try to lock me away. To look upon me is to look upon the abyss. Your abyss. For when I gaze back, I pierce through all veils. Opening. Unmasking. Revealing. Freeing. A door to inner mind-spaces of horror. Ajar.

Once, a young boy saw me. He peered into the mouth of a large pace board box that had once contained an everyday, state-of-the-art, newfangled household appliance. A shiny object installed in an American dream home. The protective delivery vessel cast out, now trash. One person’s streetside garbage is a little boy’s imagination run wild. He placed a wooden pallet against that box like a ladder to climb up and take a peek inside, dreaming of castles and army forts, and the knights and soldiers that bravely defend innocence from the evils of the world. A valiant dream, but when he peeled back the mildewy cardboard lips of that box, he saw the twisted corpse of the neighborhood girl that had been missing for several days. He glimpsed upon reality, the statistics of discarded flesh. Utterly terrified, he stumbled backwards into the busy street and was crushed by the mechanizations of industry beneath the impatient wheels of a delivery truck, ironically set about to drop off another box containing another shiny appliance.

Once, a lonely man saw me. Hermit-like, he whittled little figurines to resemble neighbors and friends and starlets and other cults of personality, to pass the time. He dressed them and painted them, even adorned them with locks of real hair acquired from the dumpster behind a local barbershop. He kept his little dolls in a display that wrapped around his entire living room. Backlights illuminated the grand glass case’s array of people replicas like a 1950s stage show production. One day, a bulb blew out inside the case, creating a dark corner in his favorite room. A shadow inside his shadowbox. The man pulled his ladder stool over to the corner where the light had failed. He climbed up, soon discovering a strange doll nestled amongst his creations that he didn’t remember making. He opened the case and reached inside. He grabbed the unfamiliar figure and brought it to his face. The doll so much resembled himself, that he slipped from the stool in shock, falling and breaking his neck.

Once, a young lady coming of age, bright and full of lust for life, saw me. She kept a jewelry box full of trinkets and hand-me-downs, shiny and precocious, on her vanity. The lid of the box was backed by a mirror, so one could admire their appearance while dawning the accessories inside. The black dahlia earrings her grandmother had given her were her favorite. The box even played a little tune when it was open; little magically tinkles of paeans to announce her astounding victories over beauty. She grew into a woman and fell truly, madly, deeply in love. Only, her love was forbidden. Regardless, she gifted the dahlias to the girl she adored. For a secret time, they were happy. The discovery of the gifted earrings by their parents, turned into a forced separation by continents, and elders claiming to know what’s best for younglings gone astray. The sacred gifts were returned, placed back into the box that no longer reflected the same woman in the vanity. Afterwards, she kept all of the secret letters from her decried lover in the box, with the jewelry. Jewelry she’d never wear again. The last letter placed inside, the one that fell all the way into the darkness, spoke of mutual defenestration. The mirror of the lid watched the open window from which she leapt, hopelessly, the same as the vanity. The jewelry box tinkled in pain for a time—slow, dissonant rings, dying, out of tune with the world. And then it stopped.

And still these are only but a dash of salt over your shoulder as to the many times and places I have crept into your worlds; looming, leering, appearing forth as stretching pitch through a spatial window. You can come across me in any dark place. All you have to do is look inside.

A cupboard at midnight, back of the kitchen, where all you thought you would find was a midnight snack. The trunk of a car, on a deserted highway, where all you needed was the spare. Inside the package ordered online, delivered expediently, materialistic doorstep consumption for all of your earthly pleasures. The forgotten Tupperware container lost in the back of your fridge, hirsute with angry growth around the edges. An old book in an even older library, dusty with neglect, misshelved for no particular reason, but you just had to open it and read a few lines. A train of thought you took, derailed somewhere in the back of your mind, leaving you stranded between stations and second guesses.

A door to that room in your house that you know you closed, that you know no one has been inside for ages, because it’s just a storage room, but now it is slightly ajar.

Coby Rosser is a weathered IT Guy from the southeastern US. Half of his childhood was spent in hospitals receiving extensive spinal surgeries for severe scoliosis. The other half was spent running around barefoot in the woods. He currently lives in an extraordinarily old house in the middle of nowhere, writes speculatively, and plays classical guitar for ghosts and cats. His writings can be found at Apparition Literary Magazine, Wyngraf, and in a Shacklebound Books anthology. Tweet him @paperninjaman

Ajar is the winner of the Apparition Literary Magazine October Flash Fiction Challenge, which was based on the Photographer/Image prompt for October: Vivian Dorothy Maier

Icarus, and the Truths That Bore Him 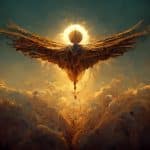