At my last D&D session, my first roll was a natural 20. I stared down at the die and laughed. “This is either a great omen, or I’ve spent all my luck.”

At home, I sacrifice oatmeal to the altar of the pigeons. If I don’t, they peck at my doorstep, literally wearing the wood away. I think they eat it. Eventually, one will tunnel right underneath my door, in its Al Capone suit and purple necktie, beady eyes blazing, and demand the goods.

I notice the birds wherever I go: what plumage flashes through the trees, what songs filter down, what dares to feed on the well-trod path. I count feathers. I must remember this. I may never see it again.

A few years ago, I lost a friend. Let’s call him Sigurd, because he had the brawn of a Norse hero and the accompanying, contradicting gentleness. It’s strange to lose friends in this age, where everything is frozen online while I still have my passwords. I can go back and read every text message. I can see the logs of every time we called, and how long. A lot of the messages are I’m home now if you want to hang out, and those memories are more ephemeral. Our group of friends, sharing a beer and talking about things I don’t even remember now.

Sometimes I wished he’d lived more of his life online, that his pictures were less blurry, the details smudged and faded just like my imperfect memories. I’ve heard that every time you remember something, it’s not the real thing. You’re remembering the last time you played through that memory, like—I don’t know, I’m too young for this—a VHS tape that can wear down. You add details, fudge others, forget.

Smell is one of the strongest sense memories but also one of the first to go. I only remember that Sigurd smelled like cigarettes because it’s so common here. Now, a man and I get off the train on the same stop, and while we walk, both trying to figure out who should outpace the other because it’s weird to walk side by side with a stranger, he lights up a cigarette. And I remember.

And I think, who’s next?

The ways we have to tell each other about deaths are so mundane it wraps back around to unreality. In high school, I saw the news of a schoolmate’s passing on Facebook while I was traveling. I thought it was a prank because that was better than the alternative. I learned my stepsister died when my dad texted me in the middle of my workday. I was so shocked I couldn’t even remember who she was, couldn’t connect the name with the face, couldn’t breathe..

When Sigurd died, one of our other friends called me, which if you know anything about Gen Z you know is cause for alarm already. I missed the call, saw the notification, no voicemail, and I thought, who died? in that half-joking way of dawning terror.

A robin catches a worm. There is an empty bird’s nest on my windowsill. A cardinal flashes scarlet through the summer foliage. A crow hangs out on the powerlines, minding its business, pretending not to be a bad omen.

A haruspex finds their omens in the entrails of sacrificed animals.

Romans had it down to such a science that archaeologists found carved stone organs, neatly divided, labeled. What does it mean if x part is missing? Is the liver shriveled, or smooth? They were big on livers, the Romans. All the poisons of the body are filtered through them.

If you took me apart with scalpel and bonesaw, you could tell how old I was. What I ate. Examine any damage acid reflux has done. Find old knee injuries. Catalogue my scars, inside and out. Even scan my brain. Go down even deeper. Trauma rewrites DNA. But you can only ever read the effects, not the cause.

It’s like my texts with Sigurd. I met him in college, where I was seventeen and nothing but raw, raw nerves. Looking back, I see how guarded I was, laughing off his every attempt to connect. He invited me to a party, once, and I don’t know if anyone but me can tell how tense, how panicked I was when I wrote back that I was too shy to party. Leaving even the wretched dormitory was a trial.

If you’re ever at a party and you need to leave for any reason, he wrote to me, let me know. Or let one of our friends know. We’ll come get you. We take care of our own.

No one else ever made me an offer like that.

Later, Sigurd would fix my shitty IKEA bed with a round saw not built to cut through the slats. We’d sit side by side at my roommate’s long table as six of us played drinking games. It was always a mistake to sit next to him; he’d compete with me, and I could only manage one PBR before the nasty, thin taste of rotten bread made me gag. I’d cheat, chugging for all I was worth while blocking the can’s opening with my lip, miming fun. No one ever called me out. My liver thanked me.

If you slice through my stories with the scalpel of literary analysis, what will you find? I write about death, but everyone deals with death. I write about tangled landscapes and grim survival. Where does it come from? Why are the curtains blue? If I don’t leave any records—no journals or essays or vulnerable tweets, if I filter it all through the muddying silt of fantasy–no one will ever know.

I want to be cremated, too, so even my bones won’t have a story to tell.

A lecanomancer reads omens in the ripples of water.

When life is overwhelming, there’s a dream in my head I return to, fleshed out and fully built as the memories of my childhood house. I’m floating in a Minnesota lake; the water is cold, green, clear but tinged murky. The light dips its fingers deep, but I can’t see the bottom. I can’t hear anything. I don’t need to breathe.

It’s ironic because in real life, my lake-swimming days are long over. Every time I ventured in as a kid, I’d panic that something scaly was about to brush the backs of my legs. I even thought there were sharks in swimming pools.

After Sigurd was gone, I went to a birthday party for his toddler daughter. It was raining, the grass squelching underfoot as we sheltered under a tent in the backyard. I had no idea what a three-year-old liked so I bought mythology books, more for myself and her dad than her.

I don’t remember what the weather was like for his funeral, but I can still feel damp socks and frizzy hair, clothes sticking to my back, one arm pressed against my stomach to balance the elbow of my drink-holding hand. Looking around and realizing I didn’t know almost anyone else, that I’d never been as intertwined in his life as I could have been, that I was never going to come back. That, at least for now, the final threads holding our lives together snapped, leaving only the spider-gossamer of ghosts.

My dog dragged all my pretty, empty notebooks off their shelf as I was writing this, and I found a memorial card from the wake. Everyone I know who died unexpectedly has left around this time of year. My body remembers even if my mind doesn’t; I’ve dreamed of him, the last few weeks, and the grief is fresh again with every dawn.

A libanomancer divines omens through observing incense smoke and ash.

It is a well-known truth that whichever side you sit on at the campfire, the smoke will blow straight in your face.

Cigarettes, and campfire smoke. My friends and I went camping a few times a year in college. I’m on Sigurd’s back, clinging on for all I’m worth, while he runs across a starlit field like I’m not even there. He could pick me up with one arm: one of my favorite things about him.

Memory fades so fast. Someone I barely knew had to remind me of the way I’d run to hug Sigurd, throwing my whole weight against him at top speed and he wouldn’t budge an inch. Missing him is even more of a mountain, is more solid and unscalable and impossible.

I’ve never written like this before, not about him or anyone else. I’ve tried to, but the words always failed me. Every description rang hollow, every emotion was too flat on the page. I’m not getting it right. I’m leaving things out. But you can’t pin down smoke. The atoms of my memory are fraying and spreading faster and faster, colors thinning out. I must write this because I don’t know how long I will remember these scenes. When they slip away, I won’t notice that they’re gone. Here, now, I bring forth the memories, tack them down on the table like old maps, chart my courses around the blank spots with shaking hands, pray that I’m not making anything up – here there be dragons.

Maria Schrater is a writer & poet based in Chicago. Her work can be found in Sycorax Journal, Abyss & Apex, and in Air & Nothingness Press’s Wild Hunt and Future Perfect in Past Tense anthologies. She is also an associate editor for Apparition Literary Magazine. She especially loves folklore and mythology and often works with retellings. When not writing, she can be found imitating bird calls in the woods. You can find her on Twitter @MariaSchrater or on her website mariaschrater.com.

Photo by Katrin Hauf on Unsplash 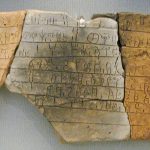 INFINITE CLAY-TABLET MEMORIES SUNG INTO THE FLESH OF THE WORLD 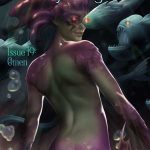