The brief blurring of reality made my stomach lurch. Pale light and green fields filled the edges of my vision. I fumbled the tray, slopping neon liquor over the rims of martini glasses. A fishbowl wobbled dangerously.

“In the name of all the multifaceted gods, not now…” I muttered.

I started again as an artificially tanned face appeared over the waitstation ledge. Kathleen could have been a ninja. A very short ninja. Maybe she was, when she wasn’t assistant house manager at B. F. Janssen’s.

“Alys, you had better not go disappearing again,” she hissed, leaning in closer. I held my breath against a draught of cigarettes and coconut oil. “We’re already short, and that six-top has been pregaming.”

I bit back a curse and steadied the tray. “On it, boss.”

I complied, stretching my face wide. I ran through a quick calculation as I glided across the floor. If the “Girlzz Night” horde (lord, the extraneous Z) wasn’t already too sloshed, I should have just enough time to deliver their ticket to the kitchen before the transition took me. I had to. As thrilling as it was to be whisked from B. F. Janssen’s into the Eternal Realm where I would once again lead the Lightbearers of Aletharia into battle against the scourger Cy’fr’ackg, I needed a paycheck to cover rent in this timeline.

“That one’s for the Briiiiiiide,” said the noisiest of the bunch. She hoisted the fishbowl off my tray and slid it toward the head of the table.

Reality wavered again. The pale sunlight of Grimmer Vale filled the corners of my vision, green slopes blackened with the scourger’s impossible force. Five of the six young women in front of me blurred into a good approximation of Cy’fr’ackgian underlings, squirming moistly and emitting high-pitched war cries. I caught the edge of the table with my free hand and willed myself to hold onto the timeline in front of me.

“Can I get you anything from the kitchen? Please note that we’re no longer serving mozzarella nuggets.”

The noisy one frowned and opened the menu again. “This is an important night, and we’re going to do it right, aren’t we, girls?”

A chorus of “Woo!” went up. Glasses clinked.

“Hm, let’s see…” she hovered over the menu, examining each line.

I could sense apprehension building, my legions rustling with uncertainty. I was the Bearer of the Blade. They needed to see Aletharia’s sword gleaming in the sunlight. They needed to hear the hero’s horn. The world wavered again.

“You take a moment, and I’ll be back.” I began to slowly back away.

“Hold on,” she took a surprisingly firm grip on my arm. I pulled away, but not quickly enough.

The wavering stopped. The noisy one and I stood together in the vale, scarlet and blue pennants snapping overhead. The battlefield was eerily calm after the bar’s buzz.

Tag along or not, I could feel the push of history. It was time to charge.

“Just stay out of the way, OK?” I drew Aletharia’s blade and pulled in a deep breath to sound the horn. The noisy one glared at me, then rounded on the undulating horde. She wrested the blade from my grip.

“I am the maid of honor,” she boomed, “and you will NOT ruin my best friend’s night!” She raised the sword high and dashed forward.

The folded steel glinted with its own light. Two hundred battle horns sounded, the notes clear and true. The Lightbearers sent up a cry, “The Maid! The Maid of Honor!” The ground shook as they pounded forward in a charge that would be sung for ages. A golden glow followed the maid as she carved her way through the scourger’s army. She was a whirling blur, dealing death at the head of the legions. My legions. My heart sank and soared at the same time.

What seemed like hours later, I found her at the center of a circle of festering ooze, the remnants of Cy’fr’ackg’s personal guard. She was sweeping the battlefield with a steely gaze. When she caught my eyes, she sighed.

“There you are. Ugh, these oozy ones were the WORST. Just, like, so gross. You can have your sword back now.”

I bowed as I took the sword. I cleaned its folded steel, and gently returned it to its sheath. It would be ready for the next time. Reality wavered again. I put a hand on her arm, and a pulsing house beat ushered us back to B. F. Janssen’s.

We stood together at the head of an abandoned table, blinking. My hand closed on emptiness where the reassuring heft of Aletharia’s blade should be. The bridesmaids and bride had improvised a dance floor by pushing aside some bar tables.

The maid of honor sat heavily. She stared blankly at the tabletop for a moment. Then she drew a deep breath, pulled a mirrored compact from her purse, wiped a stray dollop of ooze from her cheek, and applied a fresh coat of lip gloss.

“Of course. For the Maid of Honor.”

Then she hopped down from the stool and joined the dancers. Another resounding “Woo!” went up from the bridesmaids, and the bride wrapped her arms around her Maid of Honor. I collected my tray and watched for a moment as they danced in a pool of alternating scarlet and blue light, faces burnished with joy.

Preceded by coconuts and smoke, Kathleen appeared at my elbow again. She glared up at me. “You’re going to have to clock out for that, you know.”

Erin Hendel is a fiction writer, grant writer, and lapsed academic. She lives in Helena, Montana. Find her occasionally on Twitter at @ErinHendel

Photo by Xuan Nguyen on Unsplash 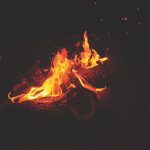 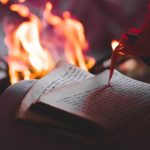