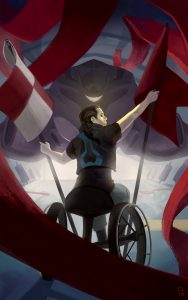 Stories aren’t formed in a void. We use myths, personal tales, and that strange family down the street that never open their windows to create something new which is wholly original to us. Creating visual art is a similar process, it’s pulling from reference materials, stories ideas, and yes, maybe even that strange family down the street to create a powerful image. When Apparition Lit shared our concept with Crystal Lipsey, this quarter’s cover art, we kept to a slim idea. We wanted a strong sci-fi theme, a woman working in a space hangar, warding off incoming ships.  She’s hoisting signal flags, large and drapey, with important information to convey. The flags were Bravo, meaning “I am taking in, discharging, or carrying dangerous cargo,” and Uniform, meaning “you are running into danger.”

Beyond whether our heroine is part of a rebellion or mutiny, she is still looking to protect outsiders. If they’re her enemy and a battle is coming, she will throw herself into the fray to warn and fight.

Crystal has drawn powerful images before. In her online portfolio, one of the standout pieces is a collection of concept art from a storybook. CORA, the storybook, is a retelling of Conan the Barbarian with a female protagonist and unique worldbuilding. Crystal worked on the project as Art Director, Concept Artist, and Writer. She used design to create a new world that stood out from the original version and created a character that was strong enough to carry her own story.

I wanted to retell the story of Conan the Barbarian in a unique way, in a unique world that I could bring to life through entirely new visuals. The more I worked on it, the more the story began to change, become my own thing. I learned that the personal story of Cora herself was more important than the world I was designing.

As the editors worked on the resistance-themed prose and poetry, Crystal sent us updates on her work. Each version added layers of colour, lighting, and complexity. We asked Crystal about her artistic process; her response reminds us of our own discovery-writing. Her sketches, or first drafts, lead to more ideas and more “what-ifs,” which then inform future choices for setting and character.

It always starts out pretty bare bones. I may have a vague idea and with that idea I start sketching. And then I think, “Yeah this is cool but what if the environment they were in was a frozen wasteland and what if instead of wood they used bones?” And then it begins to expand on that. The character reflects the environment as the environment changes.

And like all creators, Crystal has her favorite aspects of her process. What we writers sometimes call “the soggy middle” of a story (that seemingly never-ending slog between an eager beginning and a satisfying end) is the section that Lipsey relishes in her own work. She keeps it interesting and not-at-all-soggy with creative choices that transform the parts into a whole.

Crystal’s strong sense of colour and style are what drew the editors to commission her art. From creating fanart for Dragon Age tarot cards to constructing her original storybook, Crystal uses gorgeous shades of yellow and purple. Her colours are rich and her characters are rarely in shadow, always illuminated in some way. Crystal carried over this style when Apparition Lit shared our vague reference photos for the flags, the chair, and the woman’s body position. Crystal took our broad concepts, honed and sharpened them into a unique and powerful piece. As the cover art was refined and perfected, we were reading hundreds of story and poem submissions. Crystal’s work-in-progress inspired us as we built our Resistance issue. This fierce woman is undaunted, armed only with information instead of weaponry, and we wanted to make her proud.

If you want to learn more about Crystal Lipsey and her work (and we highly recommend you do!), check out the full interview below and visit her Artstation and website:

I’m from Calgary in Alberta, born and raised there! I started drawing to keep my hands busy during middle school and I just never stopped. The things I drew changed, the mediums changed, but the compulsion to create stayed the same.

When browsing your online portfolio, the piece that immediately stood out was CORA. You worked as Art Director, Concept Artist, and Writer for the project. How did you balance each of these roles? Did you find one role influencing the others?

It was a weird start, because it began as a recreation of another story for a school project. I wanted to retell the story of Conan the Barbarian in a unique way, in a unique world that I could bring to life through entirely new visuals. The more I worked on it, the more the story began to change, become my own thing.

I learned that the personal story of Cora herself was more important than the world I was designing. After that it was all about working back and forth, all elements of production feeding off one another, and even now it’s far from finished!

Your major was focused on Character Design. What is the difference between general illustration and character design?

Character Design (which was the name of my degree, though the general term is “visual development”) Is the means of creating a visual language for a project like a film or a video game, as an example. Illustration focuses more about telling a story within an image. It can be incredibly diverse in how much or how little information it gives you, while with visual development and production design you need to be entirely clear on your subject matter.

For example, if you have a character, you want to show that the characters cultural origins match up. You want to show all the layers of clothes, how they stand, how they run. That’s what a production team needs to see to use your art. Concept art is rarely ever “finished” work, while illustration is always taken to 100%. Or as close as you can get it.

I enjoy doing both!

It always starts out pretty bare bones. I may have a vague idea and with that idea I start sketching. And then I think “Yeah this is cool but what if the environment they were in was a frozen wasteland” and “what if instead of wood they used bones”. And then it begins to expand on that. The character reflects the environment as the environment changes. Cora was an entirely different character in the early stages of her creation.

The problem though is knowing when you have enough. With the world I’m building for Cora, I could go on for ages just writing about it and never actually get it done.

One project I worked on was a children’s book, and in that book tells a story of a girl whose shoes were stolen by a manta ray made of starlight. I drew from it the personal experience of when I was young and my shoes were pulled out into the ocean with the tide. I was so distraught at the time, but that memory stuck with me. When it comes to illustrative work I like to reach into my own head and find threads of inspiration from my own experiences.

The mockups and sketches in your portfolio contain fantasy or sci-fi elements. Was that always something you were drawn to?

Absolutely! I was always drawn to the impossible or the magical. My favorite stories are always the stories that went beyond my known world.

If you could shape CORA into anything, book-movie-game, what would be your preferences? What do you see as the ultimate form for that project?

I’d love to see it as a video game! At first during its original creation I was thinking about what I would need to incorporate into a hack and slash type of game (Devil May Cry style), but the more I built on it, the more expansive it got made me wonder if an RPG would be the better route. The world is getting bigger and the stories more grand.

What are some of your biggest artistic influences (both visual/non-visual artists, like writers and musicians)?

For the past year or so my inspiration has been a composer named Ludovico Einaudi. His music puts me in a very creative mindset for storytelling and story creation. Artist wise I’ve been working towards a practice similar to that of John Singer Sargent for technique. Mother nature herself has got some really interesting things that inspire me too. If you ever feel like you’re stuck when it comes to creature design, just look at deep sea fish.

For online artists, curating an audience is almost as important as curating an aesthetic—how do you represent your work online? Where do you try to promote your work?

As a freelance artist, how do you balance client requests with your own art style and preferences?

Usually when I have a request for an illustration, it’s because the client has seen my work and would like to see something of theirs in my style, though I’ve had people ask for a specific style, like intricate realism or angular cartoon-like, and I try to meet those requests as best I can. I have a pretty broad range of styles I can lean into if the need arises!

Do you primarily work with computer programs to create your designs?

I do, I work primarily with Photoshop with almost all illustrations. Sometimes I’ll dip into corel painter and I have been experimenting with art rage though more for fun rather than finished works.

What are your favourite elements to draw?

Where would you like your illustration career to goal? Any long-term or short-term goals?

Be it illustration or concept art, I’d like to find myself working in a studio with a group of people working towards a creative goal.