Allibel knotted the twine into a bow, securing the contents inside the parcel. Pulling down her mask, she pressed the paper packaging to her lips, leaving a smudge of black before placing it on the delivery raft.

The trickling waters, what was left of the once-proud Mississippi, hugged the raft with all its little might as she let it go. It sputtered on the riverbed a few times—Allibel’s heart sputtering with it—before finally catching the remaining current. Over the past few years, the river had gotten smaller and smaller, Minnesota’s shifting rainy seasons unable to completely replenish what had been lost. It was just a matter of time before this river, too, was gone.

What current remained now carried three books to one Davin Agar at 106 3rd Avenue North, South Saint Paul. Allibel had never been to South Saint Paul, had tried to stay away from old I-494 since the Fallout, but as the little stack of books floated away with her blessing, she whispered thanks to the customer, wishing them well..

Starting the trek back up the steep slope of Wabasha Street, Allibel’s black feathers bristled in the dry heat. Still getting used to them, she stretched her newly-born wings as she stepped over breaks in the asphalt, giving herself a bit of lift, trying it out. She caught her reflection in one of the only unbroken windows left on the block. The Fallout had changed her city, darkening the air and shaking the landscape. The Fallout had changed her, too, making her into something new. Allibel landed with a thud. Still learning.

A jangle of keys, the chime of the door, and Allibel re-entered A Spine of the Times. Doffing her mask and wiping her hands, she hit the power button on her laptop. While she waited for the old beast to boot up, she made her normal rounds: starting the kettle for tea, turning on the vintage “Read Brave” sign so the rare passerby would know she was open for browsing. Once the screen finally lit and her ancient software opened, she updated the order status to “shipped”, letting the customer know to be watching the water.

Allibel preened, reaching back to brush away the dust her feathers had collected on her walk, and settled in for what could be another boring afternoon. No books from her stack could distract her from thoughts of the faltering river, so she set to cleaning: sweeping up the city grit she’d tracked in, constructing a new window display, refilling the bowls outside with kibble and water. Allibel didn’t expect any customers to walk in, and if they did, it would likely be to find human contact or maybe a generous face. She could provide those things, too, but still might send them home with a paperback and dried fruit. Times might be desolate, but people were still here. Saints were still surviving.

The laptop beeped again late in the afternoon, drawing Allibel from her thoughts and back to the screen. Something else had been purchased through Spine’s website. Two orders in one day—that was hardly heard of—and peering at the screen again, she committed the author and section to memory. Classic 21st century science fiction.

Tracing her way through the well-worn labyrinth of stacks, up the creaking staircase and skirting the mysteries and thrillers, Allibel found the SFF section. She thumbed the cracked paperback spines, loved and well worn. Ogawa, Okorafor, Older—there it was. Onyebuchi.

Allibel palmed the cover; she hadn’t read this one yet, making it hard to let it go. But someone was waiting for it, and she reminded herself that it’d be impossible to read every book within these walls anyway.

A deep breath, and over the banister she went, practicing a steady descent. One wingbeat, not two, and she was back downstairs, Allibel wrapped the book as she always did, scribbling the address on the packaging and heading down to the river once more. It had gotten much hotter since morning, the sun’s gaze sharp through perpetual haze, so she kept to the anemic shade the buildings provided.

Picking her way through the scrubby brush, mindful to keep her wings folded and close against the nettles, Allibel slid to the bottom of the slope and walked to the middle of the riverbed. And there she dropped to her knees.

Dry. It was completely dry.

All along the basin, wide and cavernous between its two banks, was nothing but sand and dirt. And in the middle here, where the waters had carved a smaller path in these last years: no running water. Only mud now.

Allibel had known this day would come, had been preparing for it as much as she could. She hugged the book to her chest, its weight growing heavier. What was she to do now? What would become of their city, once the land of many waters, sister rivers? Her home? They’d already lost so much. What would they leave behind when they, too, evaporated?

The sky’s beige turned to gold as the sun lowered itself, no rain clouds to be seen. Allibel stood, feet tingling with numbness, and she weighed the book, enveloped in an old brown paper grocery bag, address written in her crooked hand.

Allibel knew where that was, had bought a greasy bag of mini-donuts dusted in cinnamon near there when times weren’t so dark.

Lowering her mask, she touched her lips to the parcel, a trace of charcoal lipstick lingering, and whispered, “People will always need books.”

Allibel untucked her wings, stretching the black feathers with one, two slow beats, getting the feel of it, and lifted off into the sepia sky. She had a delivery to make.

Jordan Hirsch lives with her husband in the city that she loves, Saint Paul, MN, where she reads, writes, and dreams about space.  Her work has appeared in The Dread Machine and Saint Paul Almanac and is forthcoming in Star*Line, Octavos, and Rune Bear.

The Last Bookseller of Saint Paul by Jordan Hirsch is the winner of the Apparition Literary Magazine December Flash Fiction Challenge, which was based on the featured image for December: Venice by Leonor Fini 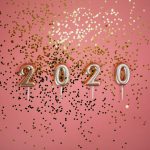 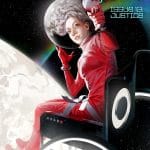