His duty is to tend the vast slough that stretches along the outskirts of Hell. Far enough away from the mayhem of Satan’s Den, the backwater is remarkably quiet between trimmings. The occasional disembowelled vulture flutters from its path, skeletal wings echoing through the mist. The Pruner trudges through the thigh-high silt, his giant legs crafted from broken sticks and black groove moss, so long and ancient that even he does not know how far they reach. The bog beneath him, a collection of excrement drained from every decaying crevasse of the underworld, sloshes with his stride.

His crop, a sea of rotten trees grafted from the most wicked specimens, spans before him. Their cold tombs submerged in black sludge for all eternity. It is a prison for the profane. Those who defiled and contaminated. Those who took without repentance. The Pruner works delicately and without rest, for as the saying goes, there really is no rest for the wicked. Nor for those in their charge.

He approaches an ashen tree and plucks it from the water with his gangly, splintered fingers. The roots snap and recoil, the branches bow and flex as he tugs, tugs, tugs, until the screaming tap-root comes free.

The man, though he no longer looks like one, spits filth from his mouth and gasps his first breath in centuries—or has it been only minutes? Time does not exist here. A trunk sprouts from the man’s skull, a sarcophagus of thorny roots encapsulates his once human limbs.

The Pruner lifts the bundle as high as the tightened roots allow, until they are eye to eye. From the hollowed holes in the Pruner’s wooden, whittled face, he sniffs. The roots are rancid, pus-filled. He picks the bottom feeders from the man’s brow and brushes the black crustaceans from the lateral roots. An eel or two slip loose and fall back into the water.

A pair of rusted shears appears in the Pruner’s hand. The metal is too dull and dirty to produce anything other than a grainy hiss as they open.

“Please! Don’t!” the man-tree sobs, kicking his viny legs at the open blades.

But the Pruner does not understand the human’s language. Nor does he understand mercy.

With the man-tree in one hand, and shears in the other, every snip is precise. The excess tumbles and splashes into the nothingness below. Here and there, only the Pruner knows where to cut. Whether it is wood or flesh or root, every part that falls away feels like an entire universe. With each slice, the man-tree feels the breath of each soul he took on earth extinguishing over and over again.

The anguished cries carry over the diseased crops to Satan’s eager ears and the ground trembles.

Finished, the Pruner lowers the man-tree back into the bog where his frenzied protests silence to mere gurgles. He will take root again and wait in darkness until the next trimming.

The Pruner wades through the muck, an endless valley of crooked treetops before him.

Damnation quivers just below the surface.

There is much more work to be done.

M Leigh is a women’s fiction horror writer from Woodinville, Washington. Some of her short stories have been published with Flame Tree, Black Hare, and Dark Rose Presses. She is currently working on her first novel. For more, check out www.mleighstories.com.

The Pruner is the winner of the Apparition Literary Magazine December Flash Fiction Challenge, which was based on the Photographer/Image prompt for December: Jungjin Lee 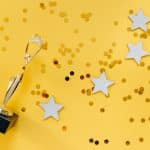