Pearl would have the truth and she finally knew how she was going to get it. The grown-ups said that Miss Smith went away. Pearl knew they were lying. Miss Smith was the best teacher there ever was and she would never leave without saying goodbye. The grown-ups smiled too much and talked too nice. At the same time, they warned more and watched closer. They hovered nearer. They were hiding something. Pearl would learn the truth and she didn’t need them to get it.

Pearl’s big sister, Ruby, had gone to a fair once and had her fortune told. A beautiful woman with real gold earrings had asked the spirits about Ruby and they had said that she would marry the neighbor boy. Ruby went mad for fortune-telling after that. She hated the neighbor boy and she said she would learn how to tell herself a better fortune. She’d bought up everything she could on the subject, until the day the neighbor boy asked her to a dance. Ruby forgot all about her books and cards, but Pearl remembered. The night after Miss Smith disappeared, Pearl went to work. If a complete stranger could pluck her sister’s truth out of the ether, she could find the truth she wanted and pick it too.

There were several dead ends in the beginning. The deck of cards told her nothing. The oval mirror in her parents’ bedroom refused to bring forth any image other than her own. Scrying would have worked better with a candle in the room; Pearl wasn’t allowed to use matches without help, yet. Pearl knew light was an important part. Candles or fire were almost always included in any ritual. While hanging laundry the next day and pondering how to get light that she could use, she had an epiphany. The sun is the biggest candle of all and she didn’t need to get permission from anyone to use its power. Being able to work in the daylight opened many more possibilities and Pearl found them in the schoolyard at recess.

Today was the day. Pearl didn’t know why she didn’t think of it sooner. Once she made the connection between the Sun and candles, other secrets  began revealing themselves to her. Marbles were crystal balls. Ring Around The Rosie with its joined hands and chanting could work the same as the séance table. These were good but she needed something more powerful. That’s why today Pearl raced to be first to the most powerful spot on the playground, the Witch’s Hat. Half maypole, half merry-go-round, all spinning tilting chaos, it combined the power from every means of fortune-telling. Pearl knew this was where she could get the truth about Miss Smith. She wasted no time, leaping onto the ledge, the frame shivering to life as it felt her weight. A metal-on-metal screech gave a greeting. The Witch’s Hat was popular. In no time at all the circle was full. Screaming laughing children held on for dear life to the sun-scorched metal as it picked up speed in a mad clockwise spin.

Pearl began the chant and the others joined in. “Ladybird, ladybird fly away home,Your house is on fire and your children are gone.”  Pearl threw her head back, her arms straight out with elbows locked, white knuckle holding on, letting her weight pull out and away. The sun shone in her eyes as the chanting went on, home, fire, children, gone. Pearl felt the force building. Tears formed in the corners of her eyes and slipped down her cheeks. Miss Smith, Miss Smith, fly away home. Your house is on fire, where have you gone? The hat jerked hard tilting to clang against the center pole. Pearl was flung forward and the boys opposite her jumped as they were flung back. Hanging on and keeping the rhythm they flung the hat back the other way. Bobbing up, Pearl saw the horizon beyond the schoolhouse with black sunspots in her vision. Down, clang, and up again, the spots grew closer together. Down again, clang again, and up again, only one black smear now, but larger. Miss Smith, where have you gone? Someone squealed and the hat changed forces again. Swirling counterclockwise, Pearl watched the spot until she had to turn her head to catch it again. It came, larger and clearer, nearer. Miss Smith, where have you gone?

It was shaped like a woman. Nearer still, it lifted an arm and beckoned. Pearl spun as the hat spun, trying to keep her eyes on the figure. Every rotation brought it closer to her. It beckoned once more, its hand scooping and pulling through the air. Come and know buzzed in Pearl’s brain. “Come and know, come and know,” the other children sing-songed in time with the creaking of the pole. A gust of wind picked up grit and threw it in Pearl’s face. A stench of something dead choked her. She needed to rub her eyes. She needed to cough hard. She needed to get off the Witch’s Hat. Through grime and tears, she saw it, the figure, now at the edge of the yard, smiling at her. Its mouth was impossibly large. It didn’t look happy. It looked hungry. Pearl then found a truth that she didn’t know she had been looking for. It was a truth that she had known all along and taken for granted. A truth that was once mundane now scared her the most. Any moment now, the new teacher, Miss Jones, would come outside to ring the big brass bell at the door and recess would be over.

Joy Weimer lives in Indiana. She graduated from Ball State University with a BA in Theatre. She has been published in Friends Journal.  She is a Quaker, a knitter, a spinner, and she has many books she has promised to read.

The Witch’s Hat is the winner of the Apparition Literary Magazine November Flash Fiction Challenge, which was based on the Photographer/Image prompt for November: Hansel Mieth 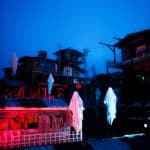 What does "Dread" mean to Apparition Lit? 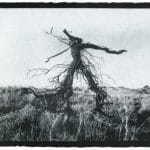