The kid shows up right as Nessa drags his chloroformed babysitter past the coffee table. Her hands full of ankle, his eyes about to pop, they have a whole moment.

Then Nessa drops the legs and grabs him. Her drug supply’s gone so she wrestles her sweatshirt (salmon pink, Wal-Mart sale) onto his little body and cinches up the hood behind his skull. She ties his hands with Christmas lights, sits him on the couch so his feet swing perilously close to the babysitter’s open mouth, and books it to his daddy’s study. Last month Nessa cased the lock on her own night of babysitting the lawyer’s son. Now she pulls her balaclava over her left ear, unhooks two picks from her cartilage, and gets to work.

The study lock proves tougher than anticipated and the kid stole valuable minutes. By the time Nessa gets the door open her watch timer reads 15:32.

She slips inside a room heavy with calculated ambiance. Nessa tries the desk first (wine-dark oak). Some rich men like the poetry of a secret drawer. Not Mr. Robard. Next she investigates oil hounds fighting over a tar eyed hare. Nessa curls her lip but presses all around the painting’s frame, checks the back. Nothing.

The fake Manet’s nailed down. Nothing behind the corner fern. Ten minutes.

If she can’t find a safe, at least she’ll take the crystal. Nessa cozies up to the lawyer’s private bar. She hefts a decanter from its slot and something wheezes: a doorway opening in the wall at her back. Glassware forgotten, Nessa approaches stairs leading down. Bare concrete that starts grey but ends in dark so thick you could eat it.

There sure as shit is no gold down there.

But she has nine minutes to make certain.

Nessa hurries down the stairway with her cell out, LED offensively bright. Ten steps end in a concrete tunnel, low enough she almost has to duck. At the end of the tunnel is a door. On the door is a padlock. Eight minutes.

Either way, this lock’s kinder and Nessa makes short work of it. At first she can’t see much, though. Her light is a wedge of white slapping a barren concrete box. Or—

Her belly goes tight. The rest of her shivers from the inside out.

A boy huddles in the corner farthest from the door: head down, arms around his knees. Bare mattress. Ankle cuff.

Nessa crosses to him, lock picks ready. The boy fixes her with large black eyes, hare black, all black? No. Reacting to the light. He drops his head fast.

“I’m going to get you out,” Nessa croaks. Her skin drums with distant thunder, thud-THUD-thud-THUD.

Nessa pops the manacle, hoists the boy up by his armpits. He’s light as yarn. They make it to the living room as Nessa’s timer blares; the boy starts and Nessa nearly drops him. The babysitter’s drooling but the kid swivels blindly for the noise.

Nessa fumbles with the front door.

“We’re not supposed to let him out!”

Movement draws her attention back. The lawyer’s son is lunging forward but he trips over the babysitter. The kid wails, the sitter moans, and Nessa gets the door open.

She half-pulls, half-carries her cargo outside. She’s parked around the block; Nessa runs as fast as she can haul. Thin screams chase them through drizzle.

Nessa gets the boy inside and throws herself into the driver’s seat, hysteria snaking around her heart in throbbing bursts. It hurts to breathe but she starts the car and guns it. She’s already calculating the evidence she left inside that house. Sweatshirt. Bag. She’ll drop him at the hospital and ditch the car, hitchhike west.

The boy puts his hand on her wrist, fingers like birch twigs, his nails so long and so sharp.

She looks down at his hand. Up, right: the blackness of his eyes. No sclera now—just pupils to the brim—

In the morning Mr. Robard finds a car just off his quiet road. Its taillights blare through the soft haze of dawn. The car is empty. He has his guy take it to the impound lot. The plates he buries.

That night he makes hot chocolate for the boys, the one who stayed and the one who keeps coming back.

Jaq Evans lives in the Pacific Northwest while working on her MFA in Popular Fiction at the University of Southern Maine. When not writing about monsters she writes about tech (but mostly monsters). Jaq’s work has appeared in The SFF Del Sol Review

Photo by Markus Spiske on Unsplash 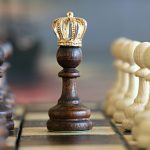 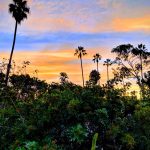